White Dog was made in 1982 and was directed by Samuel Fuller, the legendary director of Pickup On South Street (1953), Shock Corridor (1963), amongst others and sometime screen actor and starring Kirsty McNichol, Paul Winfield and Burl Ives. As Fuller was a quite controversial director, White Dog’s premises of a White Alsatian Dog trained to attack African American people was deemed very dangerous subject matter. The fact that this film is a simple allegory of racism in western society was never lost on some of the audience. Co-written by Curtis Hanson (L.A. Confidential (1997)), Fuller felt that this film, an experiment in audience revulsion as what was presented to them, would bring his underlined message of the evil of racism to a broader audience. I had read a number of reviews of White Dog and had seen the trailer online, so I was sufficiently intrigued to purchase the film to watch. Oddly enough I had actually seen this film many years earlier, possible on television as the finale seemed to have stuck in my mind, so I was glad to actually watch the film in its entirety. Fuller was a director that was never shy to deal with controversial issues and with a pedigree of films under his belt, he created a film that has more to it than meets the cinema eye. 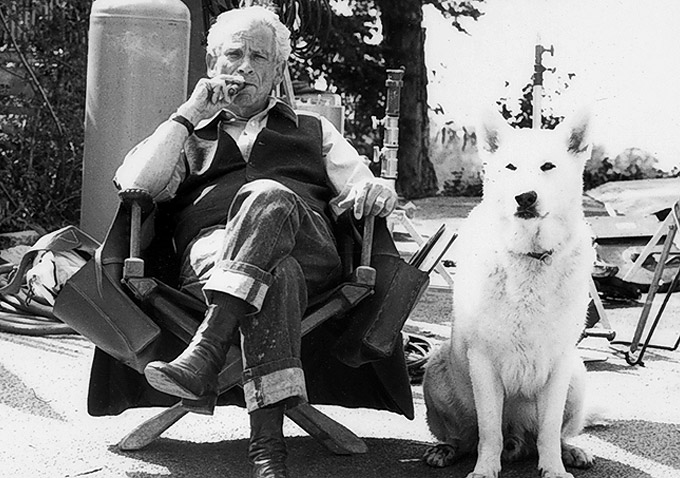 The story begins with part time actress Julie Swayer (McNichol) running over a White Alsatian dog (played by five dog actors in all, Hans, Folsom, Son, Buster and Duke) while driving at night. Overcome with guilt, Julie takes the dog to a vets and they fix him up and she pays the bill. Julie is enamoured by the dog which she adopts till she can find it’s real owner. Distributing flyers in her area, she hope the dog will be reunited with it’s true owners.

One day the dog runs off chasing after a rabbit and disappears. Julie cannot find her new friend so is very upset at his disappearance. Julie goes on the hunt for him, arriving at the dog pound where she is unable to find him. She also witnesses the death of a stray dog  in a gas-like chamber in the depths of the dog pound which makes her very upset.  The dog soon re-appears several nights late, covered in mud and blood as unbeknown to Julie, he has attacked a lorry driver cleaning the streets at night who happens to be African American. All seems okay from then on as the dog is content to be with Julie. One day Julie brings the dog to one of her acting jobs, where he attacks her friend Molly, who is an African American actress. This shocks Julie and she is torn as to what do about the dog, kill it or find a way to re-train him.

Julie eventually tries to get help from Carruthers (Burl Ives) a lager than life owner of an Animal Training and Acting Park where animals are trained to be used in films and on television. Julie explains her situation, when Carruthers states that there is nothing he can do. In the meantime the dog spies one of the workers outside, another American American and he attacks with viciousness. Luckly Keys (Paul Winfield), Carruthers’ partner and African American himself intervenes to save the worker and stares down the dog. Carruthers then explains that the ‘White Dog’ here is bread to attack African Americans and no amount of re-programming can change that. Keys adds that historically the White Alsatian was used to first track down runaway African American slaves, then later in history runaway African American convicts, as he points out there is a nasty pattern here.

Keys decides that he must break the cycle and rehabilitate the dog so it does not attack and kill African Americans. Carruthers is not so sure that he can do it and Julie is now so desperate to help the dog she will do anything to for him. So the latter part of the film deals with Keys and his willingness to break the evil of the innate viciousness towards African Americans which the dog has. As Keys states ‘…this dog sees things in black and white, black is evil to him, so he attacks…’ The scene is now set for a battle of wills between man and dog.

Meanwhile Julie is visited by the dogs real owner, an over weight, white man from a local trailer park who boasts about how he trained the dog to attack African Americans. This enrages Julie that she angrily assaults the owner verbally before driving away to see Keys and Carruthers. The finale sees Keys finally de-programming the dog, testing out his success with one of the park workers, all the while Keys is holding a gun just in case the dog turns bad. Unfortunately the dog to seemingly attacks first Julie, then in a moments hesitation, attacks Carruthers as he sees him as his old owner and seriously injures him. Keys kills the dog with a bullet and both he and Julie carry the injured Carruthers to his office.

As an allegory of programmed racism, White Dog is a definitive slap in the face, you re-coil at the dogs behaviour and the reaction of the characters towards the dog. Often mistaken for a horror film, the real life horror is the fact that there are people who do treat animals this way and feel it is acceptable. All the characters in White Dog have links to the world of film making, from Julie the struggling actress, her on-off boyfriend who is a struggling script writer, to Carruthers & Keys who train animals for films and commercials, with Fuller in a cameo as a director, all set to the backdrop of the Hollywood Hills. The film also had controversial issues while it was being made.

During filming, Paramount Pictures grew increasingly concerned the film would offend African-American audiences and brought in two consultants to review the work and offer their approval on the way African-American characters were depicted. One felt the film had no racist connotations, while the other, felt the film was inflammatory and should never have been made. The two men provided feedback on their views for the studio executives, which were passed to producers along with warnings that the studio was afraid the film would be boycotted. Fuller was not told of these discussions nor given the notes until two weeks before filming was to conclude. Known for being a staunch integrationist and for regularly giving African-American actors non-stereotypical roles, Fuller was furious, finding the studio’s actions insulting. Fuller did integrate some of the suggested changes into the film. After the film’s completion Paramount refused to release it, declaring it did not have enough earning potential and possible bad publicity as well. The film was shelved for several years.

Fuller’s film is controversial, thought provoking and sometime repulsive, but the clear message of racism being something that is programmed form an early age and ingrained in ones mind is a hard theory to displace. The use of a dog as the catalyst for the racial aggression is s good one, most people love dogs and would hate the fact that a dog was mis-treated this way. As Julie angrily swears at the dog owner for making him that way, we, the audience, want to hurt the man too. He is proud of his ‘creation’ and boasts of it as something to be happy about. Racism in any form is repugnant and prejudice and in terms of the colour of ones skin is ignorant and narrow minded. The fact that it is acceptable in some communities makes it even more nasty. White Dog’s premises is still sadly relevant today and maybe one day it might not be. Here is hoping.